Do your procurement employees seem to be fleeing the business left, right and centre? Trust us: it’s not you, it’s them! But in these circumstances, should you even bother developing them? 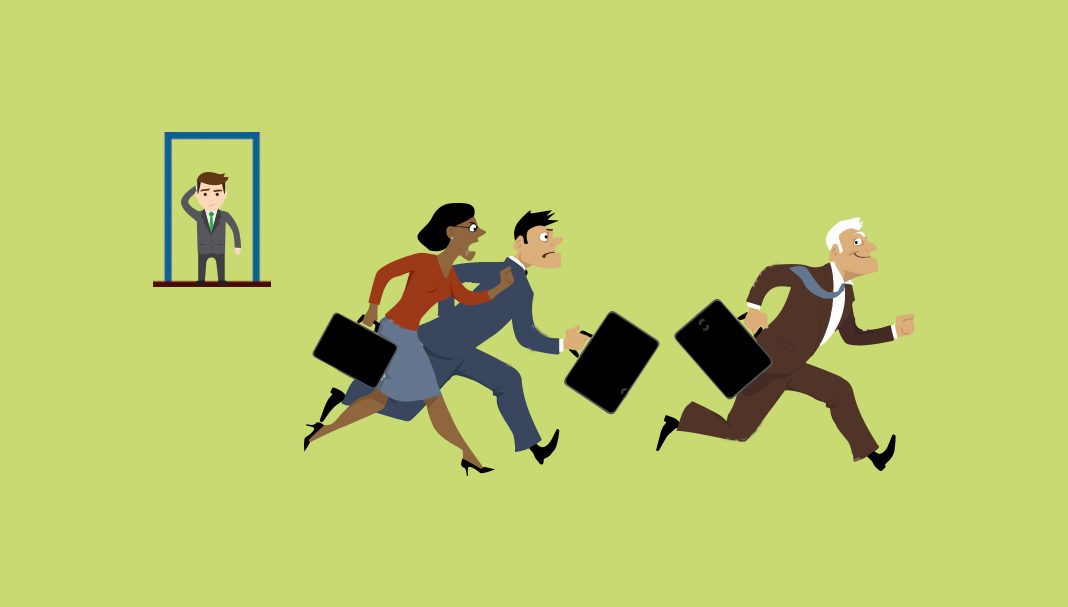 When Procurious put out a call for procurement survey participants, we were delighted that 500+ professionals across more than 50 countries shared their insights and wisdom.

The results have revealed some fascinating information about the current climate in procurement and the attitudes of professionals working within the function.

Last week, we investigated the finding that 54 per cent of procurement professionals don’t trust their boss and interviewed a number of global CPOs to find out why this figure is so alarmingly high.

This week, we’re putting the same group of CPOs to the test to find out why procurement staff are moving on from their current roles so quickly and how leaders can cope with this erratic workplace dynamic.

The Results Explained By Global CPOs

At The Big Ideas Summits in Chicago and Melbourne earlier this year we revealed the results of the survey to our CPO delegates.

In the video below we ask them whether procurement leaders are choosing to help their talent prepare for their next role or if they would rather save the effort of developing talent and instead embrace the gig economy.

The temptation to job hop is greater than ever before. As Jim Wetekamp, CEO, BravoSolution points out, “People tend to get curious.

“You have LinkedIn, Facebook and all these other platforms and all of a sudden [the employee’s] mind starts turning. Maybe this looks cool, maybe this looks like an opportunity. People have such an easy access to information.

Under these circumstances, how should leaders be managing their procurement teams to  ensure they are able to make the most of their contributions and skills in the short term?

Why bother developing the short-termers?

If almost half of your procurement team are planning to move on within the next two years, is there any point in you bothering to develop them? What’s in it for you?

Quite a lot, according to Adam Cockrell, Global Procurement Lead HSBC! He explains “It’s not necessarily about keeping them in your organisation but empowering them to [move on to] other organisations that will also be the word of mouth that brings in more talent to your organisation.”

John Foody, General Manager Procurement U.S. Steel agrees stating “Our ability to attract talent is based on the track record we have of advancing and developing them.”

Aside from talent development benefiting organisations in the long run, many leaders rightly see it as their duty to develop their employees.  Jane Falconer believes that  “As employers, we’ve got obligations to manage our teams and do the best for them. [This includes] putting development plans in place irrespective of how long they’re going to be working with us or for us.”

That’s certainly the approach Keith Bird, Managing Director, The Faculty takes “CPOs should take the high ground and develop people. Personally, I would want to be known for developing people and when they leave they leave with our blessing.”

As David Henchliffe, Group Manager Procurement, OZ Minerals reminds us “We’ve got to acknowledge that in the fairly flat organisational structure that most of us work in, people’s opportunity for progress and change will mean that they are going to move on.”

How do you make the most of your talent before they leave?

It’s a contentious and dividing subject. Some employers argue that it’s best to hold onto your talent at all costs by nurturing, incentivising and investing in them.

Others consider this futile, believing staff movement to be an inevitable part of business today. If that’s the case, surely it’s most beneficial to find ways to make the most of them in the short term?

“As leaders, if we understand that, instead of ignoring it”Jim Wetekamp continues, “It will allow us to communicate effectively with our teams.”

Anne Berens, Principal AMB ProCures LLC believes that “The key to making sure employees are effective in the short term, is making sure you quickly orient them to what the goals and responsibilities are for the role, support them in that process and make sure you are constantly encouraging contributions and effective behaviour in those roles.”

Eric  Wilson, Vice President,  Basware concedes but suggests managing your long-term and short-term employees slightly differently, “Look at your talent and identify which ones are the ones you should invest in for multiple year investment, multiple careers with me, and which ones you should treat more like a project based organisation,  where you’ve got to get quick wins from them but still help them prepare for their next role.”

It’s apparent that many organisations are reluctant to fully embrace the gig economy, which relies on flexible working, contractors and a less traditional workplace environment.

Brian Chambers, CPO CSM  Bakery Solutions highlights one major drawback,  “The problem with the gig economy is we’re in an economy of relationship building and more and more success is garnered through building relationships with folks than it is  with  bringing people in and out. So I think growing and developing the talent is much stronger than the gig philosophy.”

But if flexible working is what procurement professionals are after, there’ll have to be a level of compromise. Today 34 per cent of workers in the U.S. are freelancers, and this figure is projected to reach 43 per cent by 2020.

Michelle Varble, Procurement Director, United Airlines explains why “we do need to embrace the gig economy to a certain extent, because I’ve noticed within my organisation that individuals like to try out new and exciting projects. I’ve seen a shift away from the traditional category focussed procurement  to one where people want to be continually challenged and try out new areas.”

“I’m a classic example of the gig-economy professional”, says Kishwar Rahman, a digital transformation lawyer “I’ve moved from project to project, offering my professional skills. Businesses are increasingly looking to hire the right people at the right time for project-based employment.”

According to Rahman, the whole notion of the permanent role is becoming less appropriate as businesses transition towards a consultancy model where experts move between businesses or different projects within a large organisation. “It’s very different to the concept of the ‘job for life’ that existed in our parents’ generation.”

Request your copy of the Gen NEXT Report

The Gen NEXT report, exclusively available to Procurious members, is packed with data, insights, recommendations, and links to over 20+ Procurious articles that further explore many of the findings that are raised in the report. Email us to request your copy.

Why Contracts And Cashmere Are The Future, Says Commercial Relationship Expert